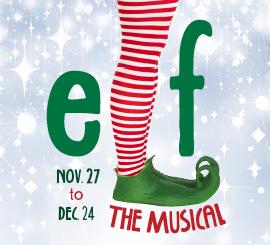 Buddy, is a young orphan who sneaks into the present bag of Santa and is taken back to the North Pole. There the would-be elf is raised unaware that he is actually a human, until his enormous size and poor toy-making abilities cause him to face the truth. With Santa’s permission, he journeys to New York to find his real father. Faced with the harsh realities that his father is on the naughty list and his half-brother doesn’t even believe in Santa, Buddy is determined to win over his new family and help New York remember the true meaning of Christmas.
Click here for more information about this activity
*Times, dates, and prices of any activity posted to our calendars are subject to change. Please be sure to click through directly to the organization’s website to verify.

All Ages Adults & kids together